The following database is showing as updated on FamilySearch:

FamilySearch is indicating that the following database has been updated since our last posting:

FamilySearch is indicating the following database has been updated:

Irish research can be difficult.

This Irish research wizard at Irish Ancestors will give you some general suggestions in response to your answers to several questions about your Irish person. It does not apparently perform automatic searches of records. The results will suggest sites you should use and provide you with some information about records that may be helpful.

Make certain you have your known information about the ancestor, his parents, and his children handy before completing the wizard.

Genealogy Tip of the Day is not affiliated with Irish Ancestors.

This is showing as updated again. Not certain how “updated” it actually is:

FamilySearch  is indicating that the following database has been updated since our last posting:

Unless I am doing something incorrectly, it appears that the 1870 census at FamilySearch does not allow one to search by locations that are more specific than the state.

This first result was obtained by searching for the last name of Riley in Hancock Count, Illinois, using the “United States Census, 1860” at FamilySearch. Notice that the event place includes details more precise than just the state. 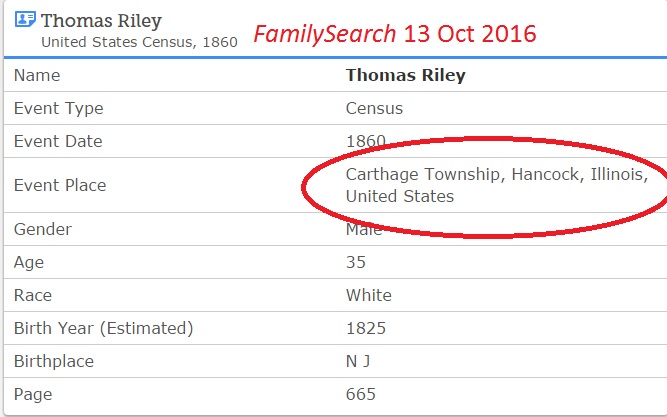 When I tried various searches of the 1870 census at FamilySearch (“United States Census, 1870”) I was unable to find anyone with the first or last name of Riley while using Hancock County, Illinois as my geographic search term.

By broadening that search, I obtained results. It was noted that the event places included for those 1870 census entries at FamilySearch only were as specific as the state. Perhaps that’s why searches of 1870 that were more specific than the state brought back no results–because that level of data is not coded in the database–or at least the searchable version. 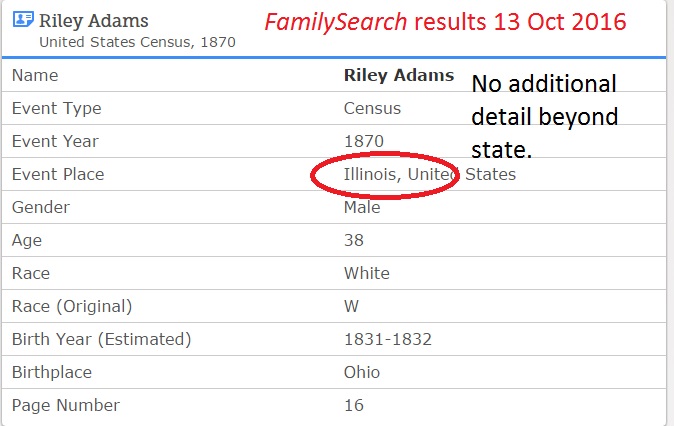 If anyone knows of a workaround or if I am doing something incorrectly, please let me know.

New subscribers to Casefile Clues will receive the first 5 issues of year 4 free when they subscribe by noon on 13 October. Subscriptions can be processed here.

More about Casefile Clues can be found on our site.

FamilySearch  is indicating that the following database has been updated since our last posting:

FamilySearch is indicating the following database has been updated: